Home » Kids Activities » What Was Life Like Back Then?
0 shares

I’m not typically a Family Circle magazine reader and I don’t collect old magazines for a hobby. But this old find is so exciting for me. Here’s the story behind it…

Recently I was looking back through some old pictures of me when I was a baby in an attempt to figure out if Rachel looks more like me or Stuart when we were babies. I ran across this picture of my Dad holding me. 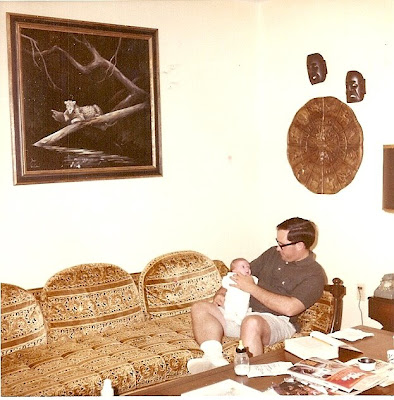 It’s a sweet picture and I’ve seen it hundreds of times before and never paid much attention to it. However, this time I took a moment to look at it more closely and think about what life might have been like for my parents at that time. They were living in an apartment in Baton Rouge at the time I was born. Mom had been an English teacher but quit when I was born. Dad was working as an accountant.

I was born at the end of September 1970 and it’s fun to look at the decor at that time. I actually remember that gold couch. I used to like sitting on it because it was sort of a soft velvety fabric. The black pattern was a different texture than the soft gold fabric I used to like to sit there and run my finger around the black swirls and feel the different textures side-by-side.

I think my parents still have thatgiantcoffee table although it looks much different now. It is very sturdy and big. I haven’t taken a close look at it since I was little but I seem to recall sitting under it and looking at some iron swirly pieces between the legs. I’ll have to take a closer look at that next time I go home to visit.

I believe thatthe leopardpainting is still at their house but I can’t recall seeing it last time I was there. I can’t imagine it is gone though. I think my parents have several paintings by this artist. Mom had told me something about the the lady that painted them but I can’t recall now. Maybe she was just a friend of Mom’s. I’ll have to ask next time I talk to her.

I can’t remember my parents ever having a rotary dial phone but that was obviously all there was at the time. The first time I recall phones in their house was when I was old enough to be on the phone all the time. I got to pick out my own Trimline phone and I picked a sweet pastel blue one.

Then I took a look at the things on the coffee table. What had they been doing or reading earlier that day? Of course there is a baby bottle. Thegianttextbook sized book is most likely Dad’s. There is a Family Circle magazine and a TV Guide. I knew TV Guide has been around forever but I’ve never had much interest in reading that.

I didn’t know Family Circle was around back then. The thought of my mom reading a magazine like that to learn new parenting ideas and new recipes for our family was neat because I do that now for my family, just with different magazines. I tried to zoom in and get a closer look at the magazine to see what that month’s issue covered but I couldn’t tell.

However, a few searches on the internet and I found a magazine on ebay that looked remarkably like the one on my parents’ coffee table. It’s dated November 1970 so I was sure this was the same magazine. 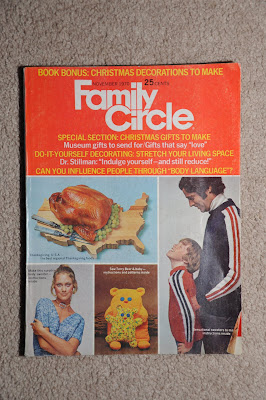 A single bid later and I became the proud owner of a copy of the magazine on my parents’ coffee table when I was a newborn. It may sound silly but for a sentimental sap like me this magazine is really special. I’ve enjoyed looking through it, especially at the ads for products that aren’t around anymore. It’s also fun to look at the prices of products that are still around today. How different things were back then.