I had just gotten home from my aerobics class and flipped on the T.V.  There was Diane Sawyer, looking a bit concerned, talking about a plane that had just crashed into the side of one of the World Trade Towers in New York.   I hollered at my husband, who was working at home that day, to come in and see what was going on.   The minute he walked in the room, they showed a live video of the second plane hitting the second tower.   We stood there next to each other, 2 feet from the television, as the newscasters began to speculate about what was going on.   We flipped from channel to channel, while the talking heads repeated the same info, and with each passing minute, and each new detail, nervousness gave way to panic. 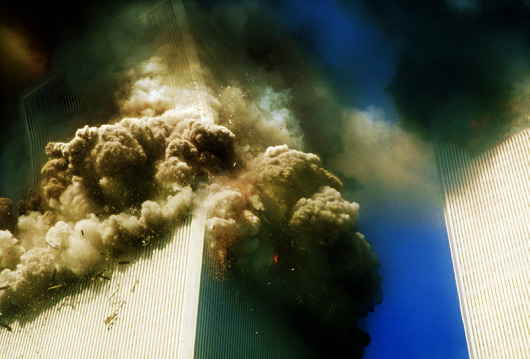 At the time, we lived directly across the street from the elementary school that my son attended, and about a mile from my daughter's middle school.   I walked over to the elementary, to see if they knew what had happened.   Coincidentally, as I came through the front door, my son and his 5th grade class were passing in the hallway.   He ran up to me, whispering, Mommy.   Did you see what happened in New York?   Do you think the bad guys will come to Dallas?    I wanted to cry right there, but I could tell he needed reassuring.   Of course not honey,  I lied, not at all sure what would happen that day.   How did you hear about it?  I asked.   He said that his teacher had gotten a phone call from her husband, and she had turned on the T.V. so they could watch history happening.   Within 20 minutes, the school district had contacted the elementary schools and instructed them not to mention what was happening, and to turn off all media.   In theory, this was a great plan for the thousands of little ears who went about their day as if nothing significant had happened.   But for the 22 kids in my son's class, this just added to the scary  factor.     The school went into lock down as I stood there in the front hallway, and I was escorted from the building.   Parents were pulling into the front drive, running up to the school's doors, only to have me tell them they couldn't go inside.

Across town at the middle school, the scene was completely different.   Lockdown had taken place there as well, but many of the kids were crowding around monitors watching the reports all day.   By the time my 7th grade daughter got home, she was more than a little worried.

At dinner that night, we called both sets of grandparents (one set in Maine, the other in Arizona) just to make sure they were alright.   Once that was settled, the questions started and my husband and I did our best to answer them honestly.   Everyone seemed satisfied as we tucked them into bed and for a special treat they got to sleep in the bunk beds on a school night.   Just as we turned out the light, my daughter said, Mom, doesn't it seem almost creepy how quiet it is without the planes flying over our house?    And you know; she was right.   Some kids live in areas where they can identify varieties of hummingbirds or butterflies, but the reality of living North of DFW is that my kids can identify the carrier operating a plane based on the tail insignia of an aircraft as it passes overhead.   (And not just the biggies in the US; I dare you to stump my kids with an international carrier!)   From 5 a.m. to about midnight, the planes zip over our town, and at some point in our life they had become comforting.   My husband and I crept downstairs, poured  glasses of wine, sat on our front porch swing listening to the silence.

Home » Home & Life » her passion » September 11, The Comfort of the Airplanes