One of the most time consuming preparations in cooking can be the simple task of cubing fruits and vegetables. 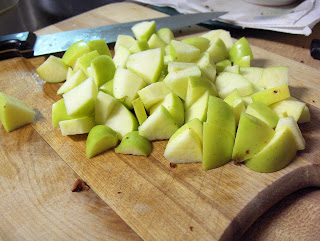 Idealy, when cubing you want each cube to be similar in size and shape. I have tried various methods of cubing, however most have resulted in squished and loppy shaped food.

Don’t you just hate it when that happens?

When I was seventeen, I randomly flipped on the television station one hot summer afternoon. The only show playing at that time was a cooking program. On that show, the chef was preparing various foods for stir frying and I became intrigued at how quickly he seemed to slice his ingredients. That Asian chef was kind of frustrating me–until I figured out his secret by close observation.

Over the past ten or so years I have humbly perfected the method, changing bits here and there to suit me. The following chart gives you my easy instructions for dicing and cubing fruits and vegetables quickly. In no time you’ll be a pro as well.

Use the following instructions on potatoes, tomatoes, pears, cucumbers, zuchinis, peaches, avocados, and of course–apples: 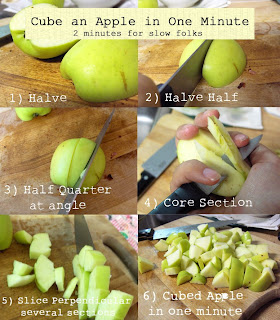